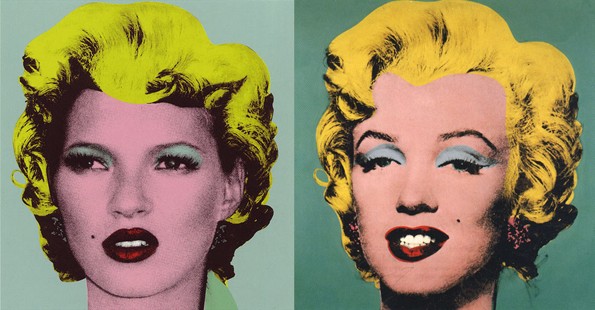 Think about it. Is that really such an odd question? Both Street Art and Pop Art have been influenced heavily by popular culture. They take political and ethical themes of the time and give them a twist. And they’ve both given the art world a well deserved shake up. Pop art took banal, everyday images and hung them up in galleries, forcing us to look at them differently. The critics praised it, collectors bought it and eventually the public accepted it. Similarly, Street Art puts a lateral slant on popular culture. But the thing about Street Art is that we didn’t have to wait have to wait for art critics to introduce it to us. We’ve had it for ages. It’s been on our walls, our lamposts, on our street corners long before the art world got involved. It’s srikingly simple, witty and intelligent. And that’s why I love it.

Until the 1st of September 2008 the Hospital Gallery in Covent Garden in London is showing works by Warhol and Banksy side by side, so now you can make your own mind up. But personally I’ve no doubt that half a century after Warhol we’re seeing the beginnings of a new art movement.