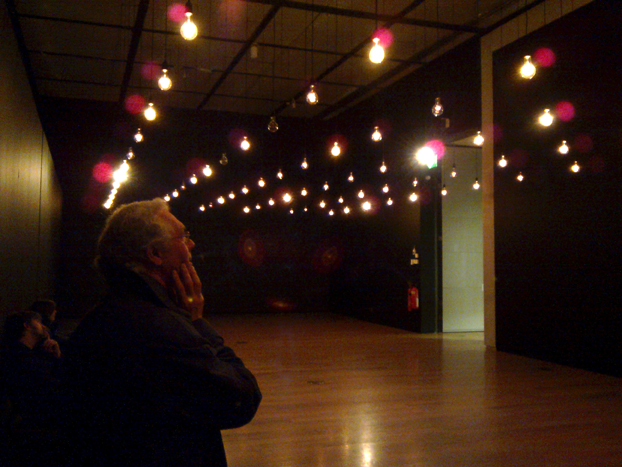 There is a room at the Manchester art gallery that is bare except for rows of pulsating lightbulbs hanging from the ceiling. Each person entering the room is invited to hold on to metal handles for a few seconds until their pulse is picked up by a heart monitor and their heartbeat is added to one of the light bulbs, pushing ahead all existing recordings. As more and more “heartbeats” are added, this hypnotic light display gradually becomes something much more alive and ominous as some lightbulbs pulsate quicker than others. The room is part of “Recorders”, an exhibition by Mexican/Canadian artist Raphael Lozano-Hemmer who is interested in the way art needs public participation to exist and develop. In his own words; “the artworks see, hear and feel the public. They exhibit awareness, and record and replay memories entirely obtained during the show. The pieces depend on participation to exist, or predatorily gather information on the public through surveillance and biometric technologies.”

I love art like this – art that is not only visually striking but is backed by a clever idea. But would it be just as at home in a science museum? In which case is it still art? If Raphael’s entire exhibition was placed in Bristol’s science museum, would it simply become a clever way of showing how technology works? Likewise, would the Force Field exhibition at Bristol’s Live Science Zone become art if placed in Manchester’s art gallery? Raphael’s “Recorders” is on at Manchester Art Gallery until 30 January 2011. The “Force Field” exhibition at Bristol’s Live Science Zone is on until 30 April 2011. Which one is the art exhibition I’ll let you decide.