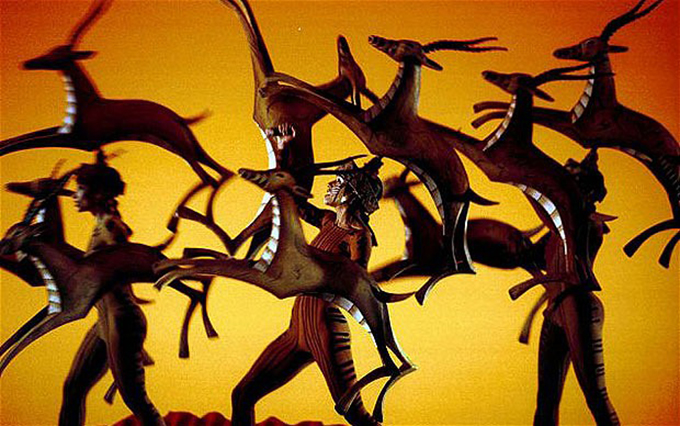 I’ve never been one for theatre. From the moment my Dad took me to see Star Wars in 1978 I was hooked on the big screen, and despite his best efforts the magic of the stage has failed to move me in quite the way a cinematic moment does. I appreciate the visual spectacle of the theatre, and that unique raw sound of a live orchestra, but I can never quite get over the overacting that seems to go with it. I understand that for a large audience to see what is going on the actors need to exaggerate their body movements to portray particular emotions, but as a cinema fan it is hard for me not to see this as overacting and this is something I’m finding hard to shake. It is the subtleties of cinema that I’m drawn to – the close ups, the lowered voices, the realism I suppose. As a picture of raw emotion I find the human face hard to beat. But during a recent trip to the West End to see The Lion King something happened that made me waver a little.

During a particularly intense scene an African woman announced triumphantly that “Mufasa is alive!” and proceeded to wave her arms around dramatically. A moment later a little girl in the audience stood up and excitedly shouted the same thing, and then an extraordianry thing happened – as the woman on stage drew a breath to say her next line she broke down in laughter. For a brief moment the actress became one of us, responding the the little girl’s outburst as we all wanted to, and the entire theatre laughed and applauded with her. It was a wonderful moment and perhaps it is this spontanaeity, these impromptu moments, that make the theatre so exciting for it’s advocates. With live actors it’s easier for us, the audience, to feel part of the performance, and so we are much more likely to connect emotionally with the show.

The Lion King is everything people told me it would be – “visually brilliant”, “great design”, “musical numbers that will give you goose bumps” etc etc. And there is something quite special about seeing a show at the theatre. But for my regular fix of visual escapism (and where audience participation is as welcome as a fart in a lift) I’ll continue to visit my local cinema.